When Permindar released her teddies into the exhibition, she invited a variety of responses. In her studio, Permindar had ownership of the installations, but in the public space of the gallery they are exposed to interpretation. Permindar has positioned herself as a caretaker of meaning, choosing to step back as the exhibition was installed, to pass responsibility for interpretation on to her audiences.

The teddies’ ambiguity – simultaneously playful and sinister – is reflected in visitors’ responses. While older audiences tend to find the teddies threatening, younger audiences have labelled them as “cute”. Keyword responses written by gallery visitors draw connections to Dante’s Inferno, anguish, sorrow and gore, contrasting with more innocent  associations with teddy bears and childhood.

Several visitors responded to Permindar’s use of space. Art therapist Andrew Marshall-Tierney comments that the exhibition “makes me mindful of placement” and how the location of an object can so significantly affect its meaning. He remarks that he was made anxious on behalf of the larger teddies, as a result of their precarious location at the top of the window. Meanwhile, the solitary teddies that sit alone in other parts of the gallery prompted Michael Wright, programme leader for Fine Art, to think about isolation.

Others acknowledged the significance of Permindar’s “mix of materials”. The contrast of soft fleece and hard copper is novel to many visitors, some of whom remarked upon her craftsmanship. “She is quite a craftswoman”, acknowledges Matthew Shaul of UH Arts. “It’s not often that conceptual artists are also able to make things themselves”. This “engagement with materials”, says exhibition curator Annabel Lucas, is particularly significant at a time when “we have lost tactile competency”. Permindar has revived a “commitment to making” that is lacking in many contemporary examples of conceptual art.

As the teddies are seemingly active, audiences speculate about the scenarios that they saw laid out before them. UH students imagine the gallery as a prison, guarded by the larger teddies in the window and populated by the smaller teddies, condemned to eternity in overcrowded cells, desperate to escape. One young viewer imagines that the teddies are entering rather than escaping, equating them to hoards of refugees, clambering down the walls as if swarming across a border to occupy the home territory of the gallery. Michael Wright sees the teddies as “little warriors descending from aeroplanes to wreak havoc on the world”. 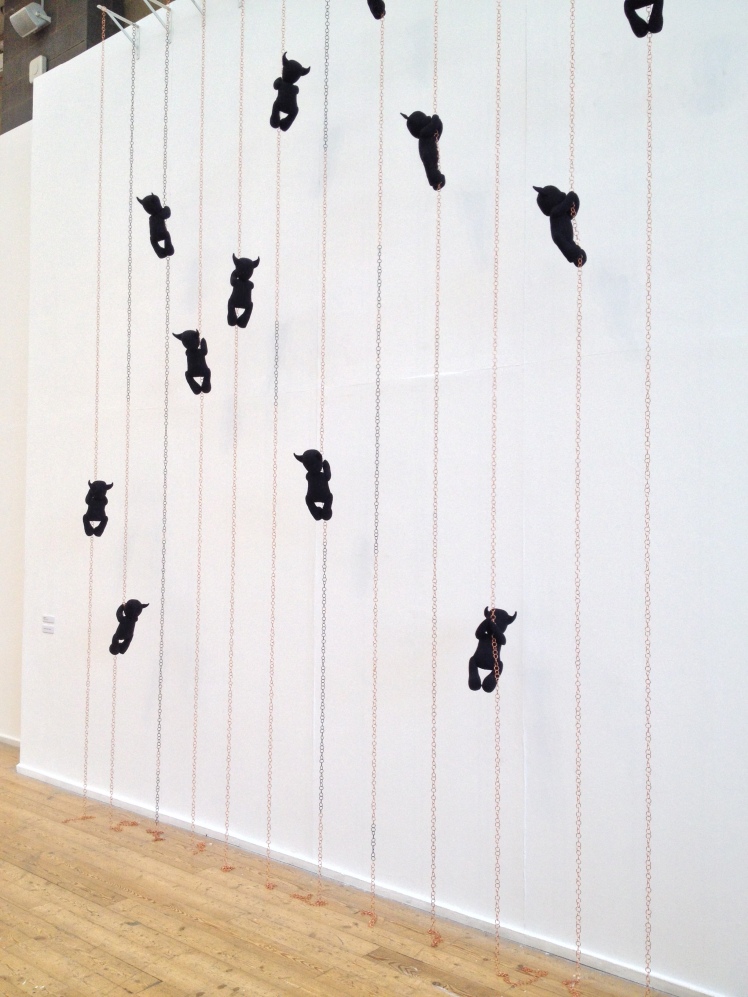 Rebecca Thomas, programme leader for Photography, notes that the teddies apparent activeness marks them as male. Historically, “the male is always active, and the female inactive”. The sense that the teddies could “come alive at night” prompted the feeling that “there is a [male] force in the gallery”. “You do feel haunted and slightly unnerved by them”, she said, and yet she also expresses solidarity and sympathy for the teddies, describing the feeling of being trapped together with them in the gallery space.

UH Arts’ Annabel Lucas, remarks upon the contrast between this and Permindar’s previous works. “I pitied the flaccid carcasses that I saw in Permindar’s previous work. These teddies are robust, full of life, thriving and evolving; adapting to their environment.” She has witnessed Permindar’s creations evolve into an empowered new species, “ever growing, ever multiplying”. She recalls the speed at which the teddies claimed their territory while the exhibition was being installed. It prompted a sense that the teddies had suddenly swarmed into the space, only to swarm out again just as swiftly and unexpectedly when the exhibition was removed. She imagines that the teddies have continued their journey, having adapted to the space, learnt all they can from this new environment, and they continued to migrate to new surroundings elsewhere.