The Art & Design Gallery on College Lane is currently host to the photography of John Myers. Myers’ exhibition, The World is Not Beautiful, collects photographs of his West Midlands home town, Stourbridge , along with portraits of its inhabitants, mostly covering a period from 1972-1979. Visitors to the exhibition find the images both “comforting” and “unsettling”, torn between nostalgia and the sense of strangeness that is evoked by the sterility of some of Myers’ suburban landscapes.

Many of the images have not been displayed since the decade in which they were produced, and indeed, some have never been exhibited at all, and so the inevitable nostalgia that arises from their being shown in 2016 may not have been present on previous viewings. Indeed, Myers opened the Private View by stressing that these were never intended as documents of a particular time or place.

The title of the exhibition, The World is not Beautiful, suggests that Myers has sought to offer an antidote to the beautification of urban landscapes that has been attempted by so many other photographers before him. He attempts to capture suburbia as it is, unfiltered and unromanticized, neither beautiful nor ugly, just “there”. Moreover, he invites us to view the wider world beyond Stourbridge through the same unfiltered lens. 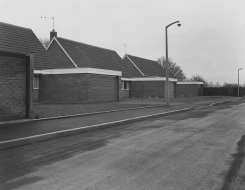 Among the photographs on display are a series of images of Myer’s local environment, including suburban streets, roads, garages, substations, factories and houses. Myer’s own website collects these images under the title “Boring”. They capture the clean lines and repetitiveness of post-war suburban architecture, sometimes punctuated with the curves of a rural landscape that stood there before.

In Dual Carriageway (1974) a road slices through the countryside, telling of the flattening of the natural landscape that has taken place to make way for the suburban infrastructure. Myers captures the linear and featureless character of the road, a space that has been said to “signify contemporary alienation through a kind of serial non-space” (Endsor, 2003). Roads, particularly motorways and dual carriageways such as this one, have been seen as “unstimulating and desocialized non-places”, and are even more so when emptied of cars and people. While roads and streets have the potential to be transformed into spaces of social interaction, Myers scenes are almost wholly unpopulated. In this image, there is one lone car, and in others, there are no people at all.

Without people, the urban landscape is unsettlingly desocialized. Comparisons could be made to the uncanniness of ghost towns, abandoned disaster zones, or even post-apocalyptic imagery, but these landscapes are so clean that many look as though they have never been occupied; more akin to “unborn cities” such as Ordos in China.

It is in their emptiness, and their sterility, that these landscapes are defamiliarized. While they are mundane, they are not everyday. Their everydayness has been stripped, along with the inhabitants. The streets, gardens and houses feel as though they have been subject to a systematic decontamination. The ordinary has been rendered extraordinary by emptiness. 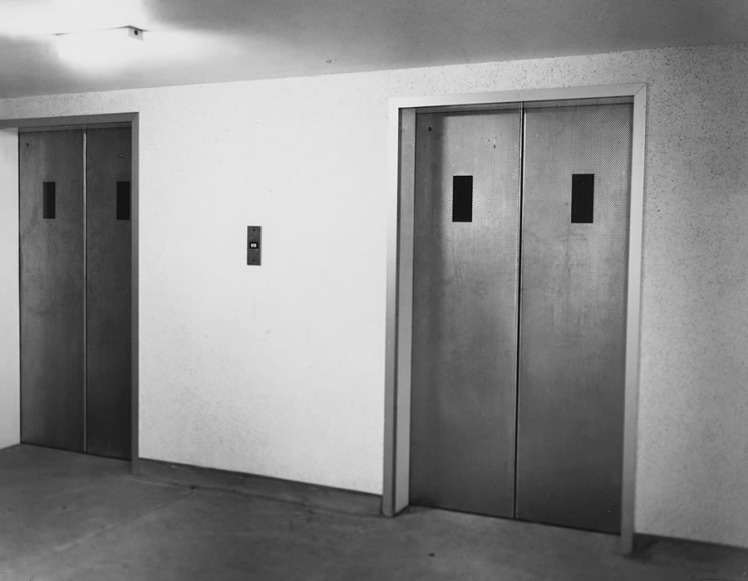 This is what Myers himself describes as “a landscape without incident”. He observes that many photographers seek to capture a moment that is part of a greater narrative, but in contrast, Myers aims to “take the story out of the world”. There are few shadows (shadow, he suggests, is “too dramatic”), and no movement. He has sought to eliminate any sign of impending events.

Myers has photographed only local, familiar settings, with the goal of “coming to terms with the world around [him], and deciding where [he is] in relation to it”. In this respect, Myers’ photographs can be compared to the poetry of the mundane, and the ways in which poetic examinations of familiar surroundings can enrich everyday experience. Rich Fruman (2007) writes that “the poet who becomes aware of the sublime nature of the ordinary becomes transformed in the same way that the student of Zen finds enlightenment: the simple becomes the profound”. The poet’s “dedication to seemingly forgettable objects renders them unforgettable”, and in that way demonstrates that an object can be “simultaneously ordinary and extraordinary”.

The next blog post will examine Myers’ portraits of friends and acquaintances, and the domestic spaces that they inhabit.

One thought on “John Myers: This is Boring”