Katy Gillam-Hull’s recent pop-up installation, which spanned the transition between the old and new St. Albans museum, sought to respond to craftsmen’s tools held in the museum’s Salaman collection. Gillam-Hull was invited to select tools from the collection of 3,000 tools, sold to the museum by Raphael Salaman and kept on permanent display until 2010, when they were removed to be stored in the reserve collection.

Conscious that Salaman had taken a very practical approach to his collection, concentrating on the tools’ functions and uses, Katy-Hull deliberately took a different approach, looking at the tools primarily as aesthetic objects. Salaman had spoken about the elegance of the tools, and it is this aesthetic feature that informed Gillam-Hull’s work. She focused her attention on the graceful, tapered curve of handles, and the beauty of their colour and material. She found herself drawn to the worn iron, steel, and wood, particularly in the handles, where years of use has influenced the tools’ appearance. To this extent, she recognised that the use and appearance of the tools could not be separated. The tools are shaped by their use, and hence, their function – even when no longer fulfilled- contributes to their beauty. 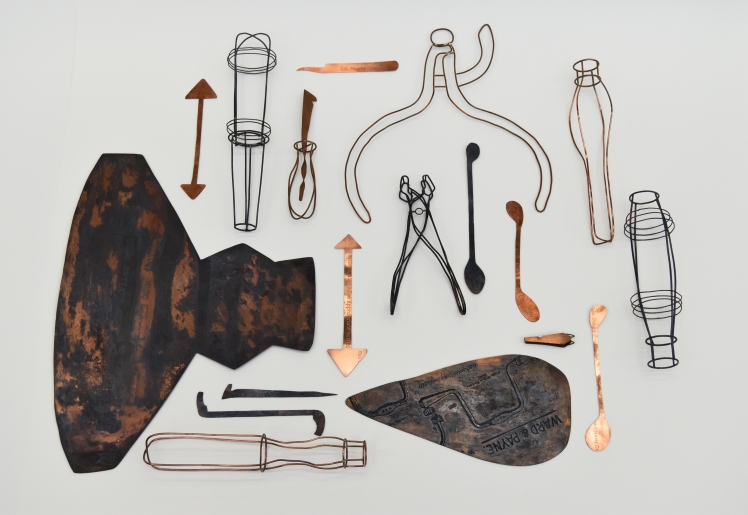 Inspired by the form of her selected tools, Gillam-Hull created a series of tool-like objects that visually referenced the uses and mechanics of tools, but that were functionless. Some of these wire sculptures closely resemble tools in form, having handle-like appendages and intersections that hint at mechanical possibilities. Others are more abstract, copper shapes, etched with sections of diagrams copied from Salaman’s Dictionary of Woodworking Tools. Her functionless objects were displayed alongside the tools gathered from Salaman’s collection, interspersed so as to suggest that all were equally useful, or useless.

In this way, Gillam-Hull located her work alongside the work of other artists engaged in the creation of functionless objects, such as Katerina Kamprani’s Uncomfortable cutlery and Tobias Alm’s Traces of Function. At the same time, her display seemed to reinforce Ernst van Alphen’s argument that an archive or museum can become a “morgue of useless objects”, depriving artefacts of the roles that gave them purpose. Gillam-Hull chose to display Salaman’s tools in what she saw as their most elegant position, resting closed, as opposed to open in a way that might imply continued use. This was, she says, the way that they were found in the archive, as “static, ghostly forms… frozen without function”,  like the “corpses of tools” whose use had been long forgotten.

The difference between Gillam-Hull’s functionless forms and the archived objects that are presented alongside them can be considered in relation to the differences between art and craft. Margaret A. Boden presents this difference as founded in the relative usefulness and uselessness of a manmade artefact. “To appreciate craftwork”, she writes, “is in large part to use it, or at least to be drawn to use it”.

Aware of the significance of the use and/or uselessness of these tools, Gillam-Hull sought public engagement by inviting audiences to handle the tools, challenging them to consider tools’ possible uses. Without providing any indication of their use, she presented a selection of tools, some whose function was relatively intuitive, and others less so. Handling sessions were held at diverse locations, at Verulamium and Homebase, which would either reinforce the objects’ value as art or as tools. At De Havilland her audience was a group of craftsmen, familiar with the tools that have since superseded those in the collection. This particular audience responded emotionally to the tools as they held them, and challenged Gillam-Hull to make similar guesses about the objects in their own toolkits.

The most mysterious object in the collection was a sailmaker’s palm, an object which baffled Gillam-Hull’s audience even after she made them aware of the context of its use. This tool, a leather halo that sits around the hand, with a hole through which the thumb passes, acted as a thimble for the palm during ropemaking and sailmaking. Gillam-Hull found that not only could participants not identify its use, they could not determine how it might be worn on the hand. The object seemed to exemplify some of the core questions that underpinned her project, showing that a useful object can be rendered useless if its purpose is unknown to its handler.

One thought on “Katy Gillam-Hull: Useful and Useless Objects”