Compassion, bravery, and “difficult choices” were the subject of a recent event in the UH Gallery. The Dr Theo Gilbert and UHArts hosted aerial theatre group Upswing as they explored the “choreography of compassion” through improvised gestures and actions. At the end of the week, having learned from their earlier explorations, the performers responded to a set of challenges that required them to work together to enhance each other’s movements, while using apparatus designed to take them out of their comfort zones. The project results from Gilbert’s research into the value of compassion in group work.

Gilbert (2017) writes that there is tremendous value in the “multiple perspectives that feed collective intelligence building”, but that this collective intelligence is compromised “when an individual, wittingly or unwittingly, monopolises”. As an educator, Gilbert is particularly concerned about how this affects a group’s potential for learning. Good ideas are stifled when one student dominates, but when students working in groups recognize one another’s desire to contribute, there are opportunities “to raise the collective intelligence”. Gilbert argues that compassion is key in successful collaborative decision making, and that mindful, “deliberative empathy” is critical in ensuring that decisions are both “helpful and wise”.

The performing arts are an ideal tool with which to explore and communicate this problem. They are built on cooperation and social awareness, with choreography that is dependent on performers’ ability to track each other’s movements. Performers often either rely on prompts (as when actors relay lines) or synchronise their actions (as when dancing with partners). Awareness of peers is engrained in the art of performance, but less so in education, where, notes Gilbert, there is “a notion that students must do their best to outshine each other”. “On the contrary,” he argues, “The most effective teams are those formed of students who are conscious of the experiences of others in the group, not just their own.” Awareness of a quiet student’s desire to contribute to a discussion, perhaps only indicated in a subtle gesture, may prompt him/her to reveal a valuable revelation. When one student dominates – perhaps because he is anxious – a challenging but gently delivered question from one student may prompt the whole group to reflect more critically on the substance of what is being said. The overall result is that the whole group leaves the discussion with a broader and more thoroughly considered understanding of the discussion topic.

Gilbert has chosen to collaborate with Upswing in order to explore how these ideas can be “physicalized” in performance. The performance arts have a physicality that helps to make compassion visible and concrete. Compassion, which might, for some students, seem too intellectual or abstract to comprehend in the context of group work, is demonstrated in Upswing’s work, where audiences can see concrete evidence that “deliberative empathy” can elevate (in this case, literally) the group’s potential. 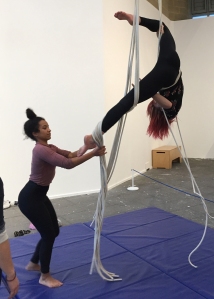 For Vicki Amedume, Artistic Director of Upswing, the project is about risk. “Improvisation is inherently risky,” she says. To some degree, she sought to increase that risk, putting performers into potentially anxiety-inducing situations, and forcing them to rely on one another to reduce that anxiety. This is, suggests Gilbert, comparable to the anxiety that some students feel during group work, with the effect that students become “self-focusing” and unable to recognize that their peers’ desire to contribute. Compassion, argues Gilbert, is a way to enable students to take greater intellectual risks, by reducing the anxiety and perceived social risk of speaking out.

Throughout the week, Amedume led her performers in improvised exercises to explore the ways in which interdependence could enhance physical performance. Performers were asked to be mindful of the actions and needs of their peers, and to intervene when they felt it would be right to do so. They began to seek a balance of support and independence, with a foundation of trust. After a period of exploration, the team developed greater awareness of each other, and became conscious of the ways in which they could, says Charlene, “facilitate [one another’s] movement”. 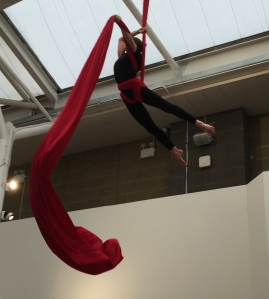 Upswing’s week in the gallery culminated in three improvised performances. For the first activity, Joana and Charlene were harnessed to the opposite ends of a single rope, looped over a beam in the gallery ceiling. Vicki Amedume narrated the activity, combining insights with instructions to the performers as they acted and reacted to each other’s movements. In this position on either end of a line, noted Amedume, “every movement that [the performers] make is transferred from one person to another”. Therefore, neither performer could follow her instructions without making it impossible for the other to do the same.

Imbalances were exposed as it became clear that one of the performers was heavier than the other. This forced the performers to begin to collaborate, to learn about each other’s differences, and to adjust their actions in order to accommodate that difference. Through trial and error, they overcame initial awkwardness by understanding their differences and working together to exploit those differences in a collaborative performance. Joana was able to journey up the rope towards the ceiling, using Charlene’s weight as a counter-balance. 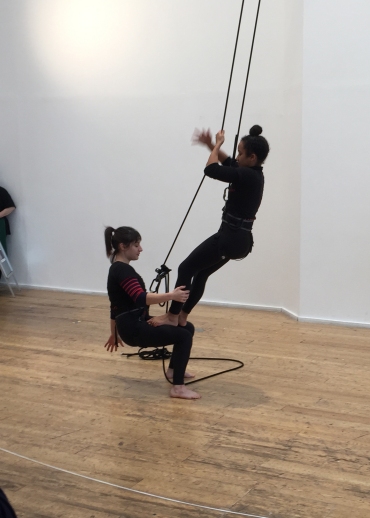 In the second activity, Joana engaged in an aerial performance while Rebecca and Charlene observed and supported her from the floor. For this activity, Amedume made a “deliberate decision not to use traditional equipment”. More familiar equipment would tend to dictate “individual performance”, she argues. She sought to take her performers out of their comfort zone with unfamiliar equipment, in order to prompt them to approach their actions differently, and in particular, equipment that “requires collaboration”. In this case, the apparatus was a bundle of ropes gathered at a single point at the top, that flared outwards when set in motion. The ropes, which were prone to flare beautifully but uncontrollably, needed be gathered by a guiding hand before they would support the weight of the suspended body. Joana was able to negotiate the difficulties posed by the ropes only with the support of her fellow performers.

Suspended above her fellow performers, Joana twisted and turned in the ropes while her fellow performers quietly monitored her movements. When they became aware of an opportunity to support or enhance her movements, they stepped in to interact, either by supporting Joana’s body or by winding the ropes around her limbs so that she was more able to support herself on the apparatus. Kinesthetic empathy, more normally experienced by audiences, is deliberately experienced by these fellow performers in order to identify the need for physical intervention. Each performer imagines herself in the same position as her peer so that she can recognize, for example, the moment when an extra boost is needed to help her reach higher up the rope. Amedume describes this process as beginning with observation, or an act of “noticing”, and leads to anticipation of movement as the performers become more aware of their collective potential.

The final activity deprived one performer of her sight so that she became reliant on verbal cues from her peers. Rebecca conducted an aerial performance, blindfolded, while Charlene and Joana stood below, monitoring and guiding her. For this activity, Amedume had purposefully denied Rebecca the ability to use the sense that is arguably the most important for some aerial performances. Amedume notes that aerial performers “need to know where [they] are in space”. Rebecca’s movements would often send her spiraling downwards, and catching herself only a few feet from the floor. Working blind, Rebecca was dependent on her observers to send verbal cues that will help her to locate herself in relation to the floor and the ceiling, and hence know what distance she could travel with each set of movements. 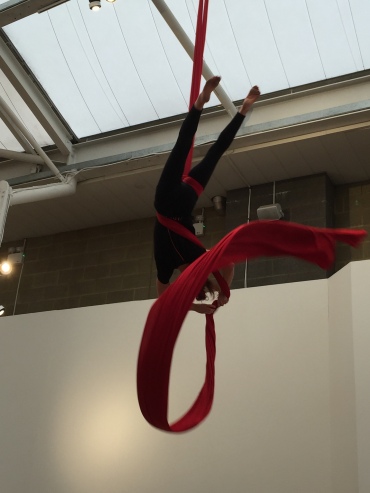 Throughout these performances, the Upswing aerialists learned that their task was more complex than it has initially seemed. As they worked, the performers began to realize that the task of compassionate intervention was as much about leaving space as it was about making contact. The performers describe how, “when we started, we were doing too much”, but over time, it became clear that true compassion requires more sporadic intervention. “If we saw an opportunity to help we would take it”, says Joana, “but also leave some space”. It is all about “timing”, she says, and “taking the right opportunity” to connect, while also recognizing the value of a fellow performer’s independence.