Between the extravagant chandeliers that hang from the ceiling of the St Alban’s Museum Assembly Room, and the dingy cells in the basement below, is a gallery space that currently houses Susie MacMurray’s Masquerade. Rich velvet and harsh wire forms sit side-by side in MacMurray’s exhibition, reflecting the history of contrast and conflict that resonates through the building.

MacMurray’s titular installation, Masquerade (2018), was created in response to its surroundings. Red velvet pouches, drawn over fistfuls of tangled wire, cascade from the fireplace onto the Assembly room floor. The location of the installation, spilling out from the chimney, was chosen to connect the building’s inner and outer surfaces. The clean, civilized Assembly room is represented in the silk velvet. MacMurray’s choice of fabric was inspired in part by historical images of the red velvet curtains that once framed the windows, and in part by the “big, puffy, velvet sleeves” that would have been worn by privileged guests in attendance at balls and dinners when this room as a functioning ballroom. 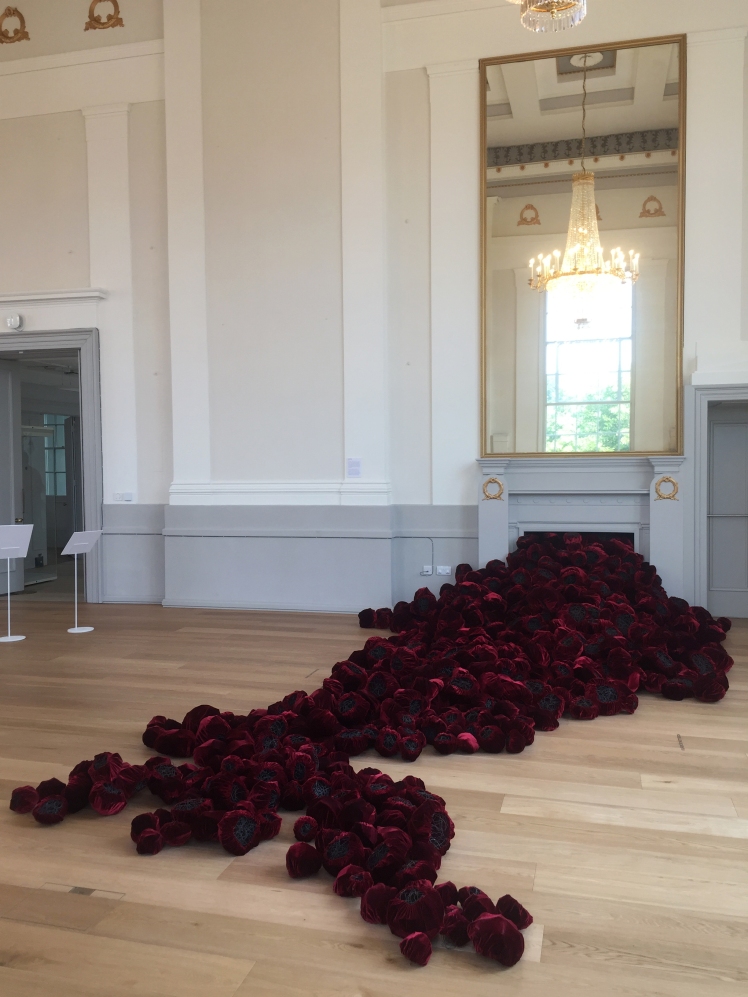 The rich velvet is contrasted by dull black wire, of the type used in reinforced concrete. It is visible in the opening at the top of each velvet bundle, where the fabric fails to fully enclose and conceal the darkness that is housed within it. Below the Assembly room lies the Court Room, the cells, and, of particular interest to MacMurray, the cast iron grille gate that separates the two. This is, notes MacMurray, “the boundary between the civilized parts of the building and the darker, seamy side underneath”. Just as MacMurray’s tangled wire is the supporting structure that shapes each velvet pouch, the dark and dingy cells form the foundation on which the Assembly Room stands. These civilized outer layers cannot help but reveal the unsavoury foundations on which they are built.

The historical inhabitants of the cells and the ballroom were, in different ways, trapped. This is, MacMurray, suggests what unites the two materials and the spaces that they represent. She has a particular interest in the life of Mary Eleanor Bowes, Countess of Strathmore, who was, duped into marriage by Andrew Robinson Stoney. Bowes found herself trapped in an abusive relationship, like many women of the Georgian era, with no control over her finances or her husband’s treatment of her. Bowes, is represented in MacMurray’s red velvet and tangled wire parcels, privileged and well-dressed, but unable to escape the traumatic everyday experiences that lay behind her Masquerade.

MacMurray is almost apologetic for producing art that highlight’s a woman’s perspective. Ultimately, she says, “it’s who I am”, and a fundamental part of identity that cannot be ignored. Conflict is at the heart of many of MacMurray’s works, and particularly the conflicts that define womanhood. Across the floor from Masquerade stands a female form constructed from layers of copper chains. The well-defined figure gives way to fluid, tangled tentacles that pool at its base. The sculpture depicts Medusa (2014), who was raped by Poseidon and later banished for her perceived betrayal. MacMurray’s production of the sculpture coincided with the grooming of girls in Rotherham, and the news headlines reminded MacMurray that “nothing changes… victims are scapegoated or somehow seen as problematic”. Though the figure of Medusa stands tall, MacMurray chose copper as the material from which to mould her form because it tarnishes over time, in reference to the perception of her and other women as “damaged goods”.

At first glance, Medusa’s form appears strong and sturdy – the many copper rings are layered so densely that they form a solid mass – but as the form divides into tentacles at the base, its flexibility becomes evident. MacMurray notes that she could have used masculine, stiff, solid copper, but instead chose to construct her Medusa from small component parts that give her the flexibility of a woman. The method of construction bears much in common with domestic crafts. MacMurray was aided in its creation by a group of students, all female, collaborating as they would in a craft circle.

Medusa forms a bridge to other pieces in the exhibition, where themes of vulnerability, displacement, and imposed otherness are also visible. Strange Fruit (2017) is a reference to the Billie Holiday protest song of the same name. Here, clusters of red velvet forms, skewered by barbed wire, are affixed to the wall. Their location, above a fireplace, mirrors that of the Masquerade installation in the neighbouring room. These Strange Fruit are made vulnerable by their otherness. The belief persists, notes MacMurray, that “the Other is such a scary thing” and these small red clusters could be frightening in their strangeness. They threaten to spread out, as unwanted infiltrators, and yet, their clustering may also be the result of a defensive behaviour, as if they are clinging to one another to find strength in a world that threatens to cast them out. 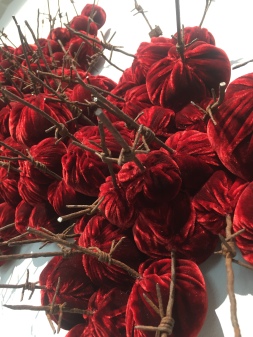 These three works are united by the stories that inspired them, all of which describe the kind of isolation and loneliness that results from being betrayed by society and its imbalanced values. Yet, these are also three stories of defiance. The Countess of Strathmore, after a lengthy court battle, succeeded in divorcing her abusive husband; Medusa, who is so often depicted as if screaming in anguish, should be, remarks MacMurray, shown laughing at the world and its follies; and Billy Holiday’s protest song contributed to the forward momentum of the civil rights movement. Though they were all victims, these women have been remembered as strong and defiant. MacMurray’s forms too, while they may be constructed of soft materials and flexible forms, determinedly occupy their space in the St Albans Museum, and will continue to stand their ground.

UH Arts works in partnership with St Albans Museum + Gallery to deliver the visual arts programme for the venue. Susie MacMurray’s exhibition will be on display at the St. Alban’s museum until 5th August, and will also be the subject of the next blog post.

One thought on “Susie MacMurray: Masquerade”